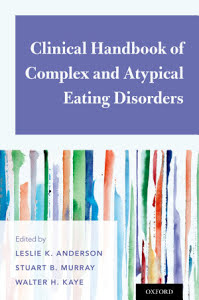 “Atypical” is the new “typical” in eating disorders. Atypical patients may easily constitute the majority of one’s practice. The Clinical Handbook of Complex and Atypical Eating Disorders, edited by Leslie Anderson and Walter Kaye of the University of California- San Diego and Stuart b. Murray of the University of California -San Francisco, is the newest, most comprehensive, and best guide to these “real-world” patients.

As the editors discuss, “Even with the DSM-5, 30-50% of all eating disorder presentations in clinical practice remain in the undifferentiated, other specified feeding or eating disorder (OSFED) category.”  Within this group, eating disorder (ED) psychopathology is “rapidly evolving” and shows that an “incredibly diverse array of illness presentations is beginning to emerge for which no controlled treatment trials have been conducted.” Furthermore, these diagnostic challenges are compounded by comorbidity and lack of diversity of patients enrolled in clinical trials. For example, “Most experienced eating disorder clinicians know that a teenager with recent-onset anorexia nervosa is most likely best treated with a family-based treatment (FBT), but less is known about the treatment of a teenager with anorexia nervosa who is also transgender and suicidal.”

In a brilliant opening chapter, Jenna L. Schleien, Gina Dimitropoulos, Katharine L. Loeb, and Daniel Le Grange further analyze the “conundrum” of applying evidence-based treatment to these conditions. Randomized control trials, the gold standard for intervention studies, typically have inclusion criteria with a narrow focus and exclusion criteria that keep out those with certain psychiatric comorbidities (between 20% to 95% of eating disorder patients have comorbid psychiatric disorders) as well as those with prior treatment with the form of therapy being tested. This lack of evidence of effective treatments is especially unfortunate because, as the authors point out, “Research suggests that atypical eating disorder cases are no different than typical cases in term of severity of pathology, degree of secondary psychosocial impairment, and outcomes.”

The authors propose a number of potential solutions to the atypical/complex eating disorder “problem.” The first is to have less strict diagnostic criteria, for example, DSM-5 modifications of anorexia nervosa (AN) and bulimia nervosa (BN). The second strategy is to set up new diagnostic groups, for example, binge eating disorder (BED) and avoidant/restrictive food intake disorder (ARFID) in the DMS-5. The third approach is to have broad categories; for example, AN-like, BN-like, BED-like, and EDNOS. A fourth strategy is to focus on dominant clinical feature categories; for example, “purging disorder” vs. “restrained eating disorder.” A fifth strategy involves sophisticated use of statistical methods; for example, a cluster analysis, latent profile analysis, taxometric analysis, and Q-analysis of clinicians’ opinions. The sixth approach would be to use dimensional assessments, which resonates with the approach of the Research Dominion Criteria (RDoC) from the National Institute of Mental Health. The seventh strategy looks at the pluses and minuses of the transdiagnostic approach.

The book is divided into three parts. In the first part, psychiatric comorbidities are examined. There are separate chapters on anxiety, post-traumatic stress disorder, substance use, suicidality, self-injurious behaviors, borderline personality disorder, and body dysmorphic disorder, as well as autism spectrum disorder. Each chapter includes clinical presentation, prevalence, treatment approaches, and further resources. In the second part, atypical symptom presentations are looked at. These include purging disorder, diabetes, rumination disorder, and muscle dysmorphia as well as specific phobia of vomiting. Other chapters focus on patients with AN who have a history of being overweight or obese and patients with ARFID. The third part of the book looks at atypical populations. The authors point to a history of neglect of these groups in controlled treatment trials. In addition, RCTs are usually conducted on “majority samples such as white, middle-class women.” Specific populations examined in this section include lesbian-gay-transgender, and queer or questioning (LGBTQ) individuals, males, pediatric patients, ethnic minorities, those with eating disorders with midlife onset, and eating disorders in athletes.

The Oxford English Dictionary defines a handbook as a book “giving information such as facts on a particular subject, guidance in some art or occupation, or information for tourists.” Few tourists visit the land of ED but for the many clinicians who want to improve their occupational skills and enhance their art, there is no better current resource. As the great Professor Ivan Eisler says in the book’s Forward, “Go read the book.”