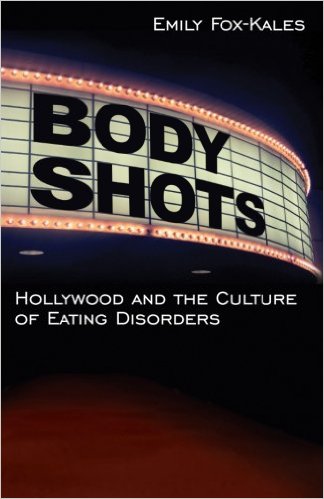 As a longtime student of eating disorders who spent most of my professional life at “Hollywood Adjacent” (UCLA), where I happened to work with large numbers of people in the film industry, I approached Emily Fox-Kales’ illuminating new book with some anticipation, hoping that it would offer more than just another description of how films contribute to eating disorders by objectifying women. I am not disappointed.

This intelligent, thoughtful book cross-fosters several intellectual disciplines-psychology, film analysis and gender studies in interesting and innovative ways. Stemming not only from her original research and scholarship, but also informed by her clinical work and interactions over with students of film and psychology through seminars and supervision at Northeastern University, Fox-Kales, clinical psychologist, cultural studies professor and film buff, draws together and integrates these various viewpoints in a highly readable discussion centering around “cultivation theory.” According to this perspective, media both reflects and reinforces cultural norms. We go to movies learn about what we (and our ideals) should be like, movie-makers learn from us what we want and what they should portray, and these interactions go back and forth in an iterative fashion, spanning our most idealized fantasies, through our mundane realities, to our abject fears and worst-case scenarios. And included among these fantasies and scenarios are those concerning the relationships of physical appearances and physiques to various aspects of personal success and failure.

Using popular films of the past several decades to provide numerous examples, Fox-Kales explores several interesting themes. In describing “body identifications – the movie screen and the mirror” -she considers how movie characters “sell” idealized screen images, and how even in the movies some actresses try to imitate and emulate other movie stars in their appearance. Clearly some viewers get in on the emulation and desire to “mirror” these characters – even to the point of developing eating disorders to achieve certain appearances.

Another theme is how fans are so often fascinated by and fixated on “celebrity bodies” – lapping up information about celebrities’ weight gains and losses, struggles with weight and eating disorders, and all the other weight-related trials and tribulations type gossip that fills the tabloids. “Body Mastery and the Ideal of Fitness” is another prominent theme in the movies. Think Uma Thurman in Kill Bill, Angelina Jolie in the Lara Croft: Tomb Raider films, and Hillary Swank in Million-Dollar Baby.

The concluding chapter focusing on “Alternative Visions” is edifying and points out that mature perspectives on body image and weight are possible in popular movies (e.g., Real Women Have Curves). But, such alternative visions are much more likely to be portrayed in “indie films” (from independent film makers) than in films emerging from the big studios.

As intended, the book will make an excellent text and resource for seminars in psychology, films and gender studies courses. For ordinary film buffs the book will offer a provocative read, stimulate new thinking about how films message physical appearance, and inspire greater use of Netflix – to be enjoyed with or without popcorn.