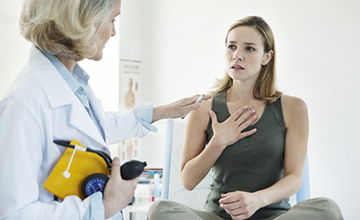 Adolescents with anorexia nervosa (AN) generally present with similar physiologic changes from starvation as are seen in adults.  One common sign is orthostatic hypotension and tachycardia, which are increasingly detected as the severity of AN increases.

Orthostatic hypotension can cause syncope, dizziness, weakness, and lightheadedness.  Orthostasis is defined as a drop in systolic blood pressure >20 mmHg with or without a drop in diastolic blood pressure >10 mmHg, or an increase in heart rate >20 beats per minute (bpm) upon standing.  Of note, a very recent study demonstrated that finding an orthostatic drop within the first minute after standing more accurately predicts dizziness and future adverse events than finding it at the long-recommended 3 minutes [Juraschek, 2017].

In one retrospective study of 36 adolescents with AN [Shamim, 2003], time to resolution of orthostasis was defined as the day after which the patient was no longer orthostatic for 48 hours.  In Shamim’s study, 60% of adolescent patients with AN had orthostasis on admission, and this number increased to 85% by the fourth day after admission.  Normalization of pulse changes was achieved at around 3 weeks; on average, patients were 80% of ideal body weight (IBW) at the time of resolution.  Shamim’s study also found that orthostatic pulse changes were more sensitive indicators of hemodynamic instability than were blood pressure changes, and the orthostatic changes took longer to resolve.  Similar results were found in a smaller study by Hill and Maloney, who found that the mean number of days until patients were no longer orthostatic was 27, and orthostatic hypotension was resolved when patients achieved a mean IBW of 79.5%.

A Marker of Instability

It is well established that the cardiovascular response to prolonged starvation is compensatory bradycardia and hypotension, due to the profound parasympathetic predominance at low body weights [Sachs, 2016]. However, tachycardia in patients with AN may be predictive of arrhythmia and risk of sudden death when associated with excessive sympathetic nervous system activity [Krantz, 2004].  An elevated heart rate may indicate a cardiac compensatory mechanism for congestive heart failure, and has been described during refeeding AN patients.  Therefore, closer medical monitoring is recommended when an adolescent patient presents with elevated heart rates and demonstrates orthostatic changes.

A residential or inpatient level of care may be prudent for patients with significant orthostatic changes.  In one study of adolescent males with AN [Siegel, 1995], four of 10 patients presented with relative tachycardia (heart rates of 80 bpm or greater), and three out of four developed life-threatening complications, including severe electrolyte disturbances and congestive heart failure; one patient had cardiopulmonary arrest.

In Tokumura’s study of 40 female adolescents with AN, in which an unfavorable outcome was defined as  <85% of age- and height-specific standard weight, and absent or nearly absent menstruation, tachycardia at rest in the convalescent period was associated with an unfavorable 5-year outcome for patients with child- and adolescent-onset AN. It is suggested that adolescent patients with AN who have higher heart rates at rest are affected by more severe autonomic nervous dysfunction than those are those with bradycardia, thereby having poorer long-term outcomes [Tokumura, 2012].

Thus, one might conclude from the literature that the presence of orthostatic changes may indicate a compensatory mechanism for a patient’s malnutrition, and serves as a marker of more severe illness.  For more refractory of symptomatic patients with AN and orthostatic hypotension, a trial of clonidine, fludrocortisone, midodrine or coenzyme Q10 may be worth considering [Rembold, 2018].

Dr. Mehler is President, Eating Recovery Center, and Founder and Executive Medical Director of ACUTE at Denver Health. He is also the Glassman Professor of Medicine at the University of Colorado School of Medicine, Denver. He is author of 425 scientific publications, including 3 textbooks.  One, Medical Complications of Eating Disorders, published by Johns Hopkins University Press,is now in its third edition.  His newest book (with Arnold Andersen, MD), Eating Disorders: A Guide to Medical Care and Complication,was released in November 2017.

Dr. Kessel is a specialist in child and adolescent psychiatry at the University of Colorado-Denver, Aurora, CO.