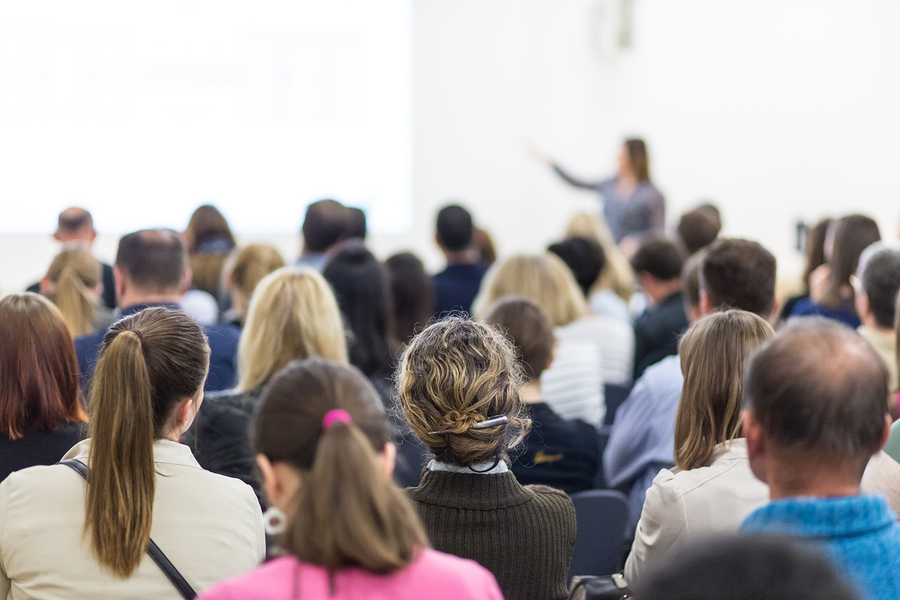 With the publication of the DSM-5, binge eating disorder (BED) finally became an official diagnosis. Although BED is the most common eating disorder with a 2.4% prevalence rate, it is still being defined, as was evident in several presentations at the International Conference on Eating Disorders (ICED) meeting in Prague. In workshops and paper presentations, clinicians from around the world presented their original BED research and reviews.

James E. Mitchell, MD, Chester Fritz Distinguished University Professor at the University of North Dakota School of Medicine and Health Sciences (and emeritus EDR Editorial Board member) set the stage with four-part training presentation on BED during the ICED Clinical Research and Training Day. One intriguing area of research includes new studies of gut microbiomes. One finding is that individuals who consume a diet rich in lipids and carbohydrates have a distinctly different set of gut bacteria compared to those who consume a low-lipid/low-carbohydrate diet. As for treatment, CBT is a well-established treatment for BED and most patients improve substantially and these improvements are generally maintained at 1-year follow-up. Integrative Cognitive-Affective Therapy (ICAT), which helps patients with BN and BED improve their eating behaviors, diffuse bulimic triggers, and better regulate thoughts and emotions, is among the newer treatment approaches. CBT is more effective than other therapies, with the possible exception of Interpersonal Psychotherapy, Dialectical Behavior Therapy, and supervised self-help, he said.

Six paper sessions on BED sought to answer a few of these many questions.

Are DSM-5 Indicators of Binge-Eating Episodes Valid in Obese Adults?

Thus far, studies of the validity of DSM-5 signs of episodes of binge-eating episodes indicating loss of control have produced mixed results, and there is no naturalistic evidence about whether the indicators are characteristic of binge eating at the time it occurs.

Dr. Andrea Goldschmidt of Brown University, Providence, RI, and her colleagues designed a study using ecological momentary assessment (EMA) to examine whether eating episodes were actual binge-eating episodes or non-binge-eating events. The study participants were 50 obese adults (mean age: 40.3 years; mean BMI: 40.3 mg/kg2). The EMA procedure involved carrying a handheld computer for 2 weeks. The participants used the computer in several ways: (1) to record symptoms before and after eating episodes; (2) for signal-contingent recordings based on 6 semi-random prompts sent to them each day; and (3) to record symptoms each night before bedtime. Participants received $75 per week for completing the assessments, and a $50 bonus for responding within 45 minutes of receiving the random signals. Dr. Goldschmidt reported that participants responded to more than 90% of the random signals they received.

Is a Taste for Sweet Foods a Signal of Binge Eating?

Erica L. Goodman reported the results of a recent study she and her colleagues performed at the University of North Dakota, Fargo, and the University of North Carolina, Chapel Hill. The team was searching for a possible link between a preference for sweet-tasting foods and binge eating. If they could show this connection, this subgroup of patients might be at higher-than-normal risk for developing diabetes mellitus, metabolic syndrome, hypertension, psychological stress and impaired blood glucose levels, among others. In turn, the group would have greater degree of food cravings and would consume more calories overall as well as more calories from fat and carbohydrates. This would lead to greater postprandial changes in in insulin and glucose levels than among participants without a preference for sweet foods and carbohydrates, or “sweet dislikers” (SDL).

The authors’ study group included 41 persons with BED; 85% were female; 82.9% were White, 12.2% were African American, and 4.9% were categorized as “Other.” The mean BMI was 34.5 mg/kg2. All participants participated in a Sweet Taste Test, where they tasted 5 concentrations of sucrose, and indicated their liking of the concentration and judged the intensity of the solution.

Patients with a combination of BED and who are sweet-likers may be at an even higher risk for such dysregulation, she noted. This may, in turn, place individuals of this specific phenotype at a heightened risk for developing diabetes or metabolic syndrome.

The authors’ results provided evidence that individuals with BED who prefer sweet-tasting foods may have elevated risk for increased binge eating, craving/intake of high-fat foods and carbohydrates, and for developing glucose intolerance, as seen by limited response in insulin to high blood glucose as well as less of a change in glucose regulation. These individuals may be at greater risk for obesity and related conditions such as diabetes and metabolic syndrome.

What Are the Best Treatments for BED?

A host of treatments have been proposed for BED, including therapist-led cognitive behavioral therapy (CBT), pharmacologic therapy with a host of products, including second-generation antidepressants or lisdexamfetamine dimesylate (LDX ®), and behavioral weight loss treatment. Dr. Christine M. Peat, from the University of North Carolina, Chapel Hill, and her colleagues recently performed a review of the literature to determine the effectiveness of treatments for BED. They found that a definitive answer was elusive.

Dr. Peat noted that numerous agents are used off-label for treating BED but currently only one agent, LDX, an amphetamine originally designed to treat attention deficit hyperactivity disorder (ADHD) in children, has FDA approval for treatment of BED. When LDX was compared with second-generation antidepressants in 11 different trials, the differences in efficacy were nonsignificant. When variants of CBT and behavioral weight loss were analyzed, there also was no definitive difference.

The authors concluded that BED treatment includes a variety of effective choices, but more head-to-head trials of active interventions are needed. In addition, the group suggests that stepped-care models are needed to better tailor interventions to individual groups.

How Does Food Addiction Differ from BED?

Ariana Chao, PhD, of the Pennsylvania State University School of Nursing, told audience members that food addiction is a popular but controversial concept that is often described using criteria borrowed from the DSM. Food addiction affects from 1%-9% of the general population and 15% to 57% of obese individuals. Food addiction also occurs in from 42% to 57% of BED patients. Some researchers have suggested that food allergy and BED be treated before weight loss programs are started.

She also described results of The Penn Weight Healthy Eating, Exercise, Lorcasein (WHEEL) study. This 14-week weight loss intervention followed and analyzed rates of attrition and percentage of weight loss among 178 individuals. Of the 178 participants, 2% had food addiction plus BED, 8% had BED alone, and 5% had food addiction alone. Limitations of their study, according to the authors, were that all participants had sought treatment and all were Black females.

At the end of the 14 weeks, the authors concluded that neither food addiction nor BED is likely to be a mechanism for obesity. There was no short-term attrition, and having a diagnosis of BED was not a contraindication to joining a behavioral weight loss program. Also, patients with food addiction, like those with EDs, may need additional support during weight loss treatment, advised Dr. Chao.

The Effects of Weight Regain on Bariatric Surgery Patients

According to the American Society for Metabolic and Bariatric Surgery, the number of bariatric surgeries performed annually is quickly approaching 200,000. Thirty percent of bariatric surgery patients experience suboptimal postsurgical outcomes such as losing only half of their excess weight. And, among patients with suboptimal weight loss, 56% need a second surgical procedure. High attrition rates are seen at follow-up.

Two paper presentations reported studies that examined the role of weight regain after bariatric surgery with gastric bypass and gastric sleeve surgery and psychiatric comorbidity, and the validity of an instrument for selecting patients for bariatric surgery.

Lianne Salcido, MS, of Stanford University, reported on the Stanford Bariatric Integrated Psychosocial Assessment for Surgery, or BIPAS, an 18-point screening instrument her group developed to establish guidelines for a standard definition of weight regain after bariatric surgery. The goal was to provide more effective screening tool for patients undergoing bariatric surgery. The group hoped to establish a standardized definition for what is significant weight regain and to provide a natural point of intervention. The BIPAS covers 4 psychosocial domains associated with poor post-surgical outcomes from gastric surgery. Salcido said the instrument was adapted from an empirically validated and reliable screening tool originally developed to predict adverse outcomes in transplantation patients

Salcido noted that many presurgical psychosocial evaluations and self-report measures cannot adequately predict which patients are most at risk for poor results. Part of this is due to insufficient characterization of psychosocial or behavioral variables as well as lack of standardization for assessing bariatric surgery candidates.

What Is a Healthy Cutoff for Weight Regain after Bariatric Surgery?

Maria Francisca Mauro, MD, and her coworkers in the Obesity and Eating Disorders group at the Federal University of Rio de Janeiro, Brazil, reported that there is a clear lack of standardization or a healthy cutoff point for weight regain after bariatric surgery. “Weight regain” was defined differently in 11 of 13 articles the group reviewed.

Dr. Mauro noted that the general prevalence of weight regain after bariatric surgery ranges from 14% to 77%, and, importantly, the researchers’ review showed no clear evidence of preoperative general or eating psychopathology or an impact on weight regain after surgery. However, in contrast to earlier studies, their findings agreed with previous systematic reviews showing that postoperative eating psychopathology, including BED, loss of control eating, substance use (especially alcohol abuse), and “grazing” may have an impact in weight regain after bariatric surgery.

Dr. Mauro said that the lack of a standard definition for weight regain has had an impact on how the outcome of gastric surgery has been reported in the literature and in the analysis and interpretation of the current literature in the field.